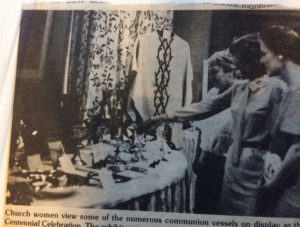 Here is my very first vestment: read on to see how it came to be…

We moved to Baton Rouge LA in early 1980 and began the search for our church home. Having come from Michigan, it was quite a challenge as the norm in Louisiana was for the children to be in Sunday School until they were 13 at which time they were Confirmed, given their First Communion and expected to sit in church. For our 1 and 6 year olds, the norm had been to be active participants in worship. After many an awkward visit to various churches throughout Baton Rouge, a neighbor suggested perhaps we would enjoy St. Margaret’s Episcopal Church, the new mission in town. The following Sunday was the start of Lent. Our one year old was ill so I took our son to investigate. They had built their parish hall first and were worshiping there with gold shag carpeting beneath the altar and folding chairs. The Spirit was alive and I can still see Fr. David Powers, a tall man with a deep bass voice, placing a chair on the floor center front and calling all the children to him. Scott ran up to join in as he read Trina Paulus’ Hope For the Flowers to them in lieu of the sermon. Scott was mesmerized and ran back to his seat saying “we’re staying, aren’t we?” and, of course, we were!

At the time of announcements, David asked if anyone would take home the frontal kit that had been purchased for Easter. It was a fancy brocade with a large embroidered cross that had to be hand applied. I volunteered and they gave it to me. So it was the most unexpected and unplanned journey began.

We joined St. Margaret’s and the children flourished. After a few months, I discovered how much the kit had cost and suggested we could have made it for a lot less ourselves to which David responded; “I’ve always dreamt of a Lenten set made of linen symbolic of the curtain torn asunder”. And I thought, why not?

I have always sewn. Being the middle of three girls, if my mom didn’t make it, we didn’t wear it. She had little patience when we were young to teach us but my father collected little old ladies who became a part of our lives and I learned so many techniques at their knees from tatting to hucking to hand work and more. As we got older, mom taught us all about dress making.
I am a Nurse by profession and soon discovered my drawing talents were far from acceptable. I must have drawn at least 70+ designs before I finally arrived at one I thought might be okay. When I showed David, his response was to say “great start”… not what I wanted to hear.

I became quite ill but was recovering in time to go to the Verna Dozier Conference at a Retreat Center. Everyone was concerned for me and chose not to awaken me as I napped through one of the sessions. As I awoke, I remember quickly grabbing the envelope of my registration packet and sketching out what I saw. I was so pleased! It was in that moment that I came to know to wait and see what the Spirit had to say. Sometimes, I see things very quickly; other times, it takes much longer… but I always wait for the Spirit.

As soon as we returned, I went to see David to show him. He was very pleased as well and said, “I see you added in a tear”. I said no, it isn’t a tear but a leaf. He told me I couldn’t have a leaf that this was a Lenten set… to which I responded it was Lent, I needed a leaf. We went around and around until the day the linen arrived and I told him I would be starting that afternoon. He stopped me and in his deep bass voice told me I could have my leaf “as long as it isn’t Kelly green”.

I made the set. Serendipity stepped in as the first Sunday in Lent that year was St. Patrick’s Day. His whole sermon was about how most of us were wearing green and so was he; but we would have to look for it. That little leaf became the start of what would be Fruit of the Vine.

In the beginning, I never expected to have anything come of vestment making so my pictures are not so good. I created a contemporary Celtic knot of thorn vines for the back of the chasuble. The single green leaf grows toward the center. The front of the chasuble repeated the Celtic vine of thorns woven into the Crown of thorns with the Cross within. I used black, gray and purple fabrics for the vine and added in some red threads. 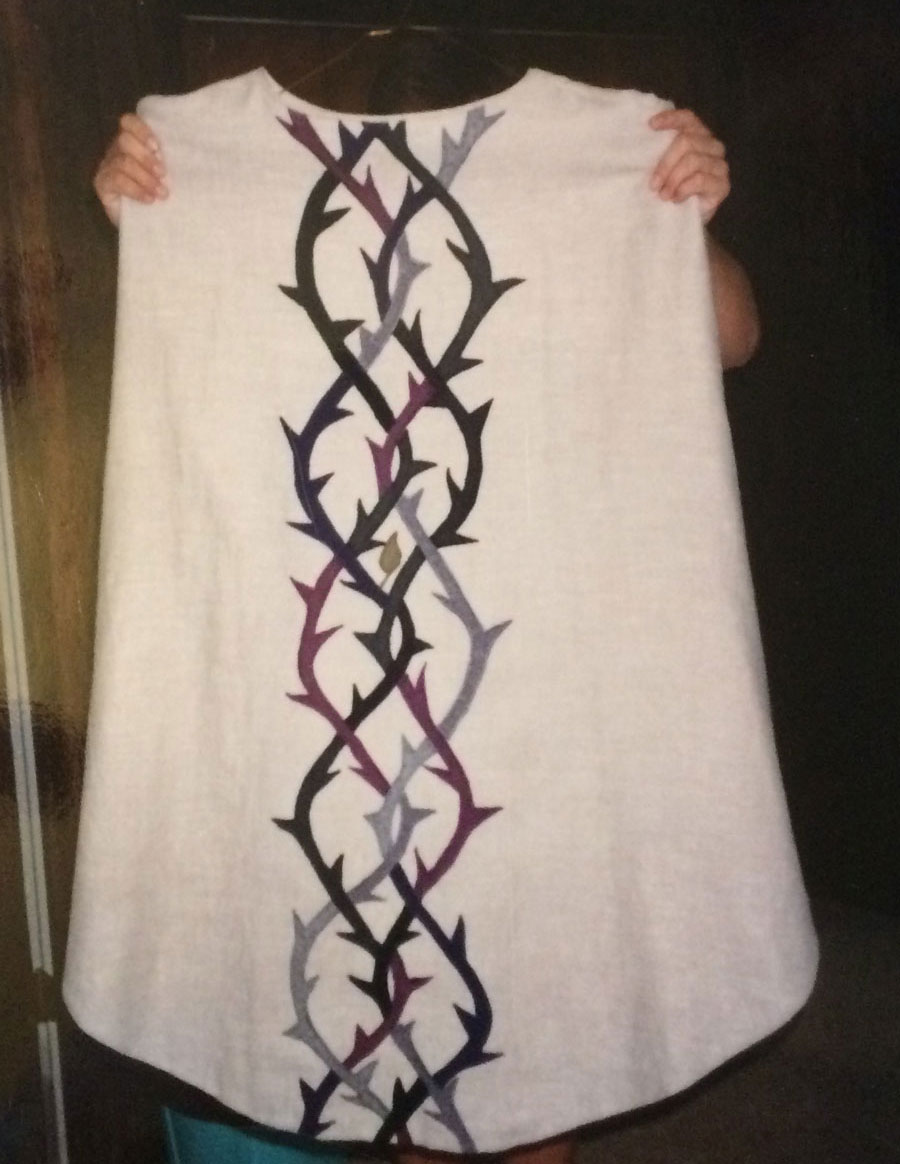